On November 11, 2014, Veteran’s Day, residents of Page Manor in Athens gathered together to dedicate a new POW/MIA Flag in honor of all veterans, past and present. Residents and staff are very thankful to the Sons of the American Legion in Athens for donating the flag.

Those in attendance were  Gordon Tyrell, who served in France and Germany, Milton Kessler, who served in Japan, mothers of veterans Myra Johnson, Julia Bruce and Geri Andruzzi, as well as Tony Ennis and Lyle Lane.

Veterans residing in Page Manor who were unable to attend the event were Felix Hyjek, David Kriner, Jim Wortman and Lorrie Trivelpiece. 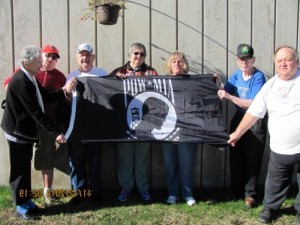 I am the footer call-to-action block, here you can add some relevant/important information about your company or product. I can be disabled in the theme options.
Get In Touch